As Rajat Kapoor’s take on Shakespeare’s ‘As You Like It’ premieres at NCPA tonight, we speak to fashion designer Tanya Sharma about her experience and the challenges she faced while designing costumes for this ‘clown play’.

I’ve always looked up to theatre and I respect all the hard work and dedication that goes into its production. Having designed for two plays earlier–one with Makrand Deshpande and one called The Living Room with Kalki Koechlin–Rajat Kapoor approached me for the costumes of his next play. The rest, as they say, is history!

In theatre you get to work closely with the actors. For my label GaGa, apart from the customized products for specific clients, it’s mainly my own process and ideas. In theatre, you have to work with the actors, understand their roles and developments and then represent that in the costumes. It’s challenging as a lot more personal than any other form of design.

Rajat uses clowns to reinterpret Shakespeare plays. In this play, he has used clowns for creating and acting out perspectives. So it’s a layered representation, apart from the gags and fun. There are a lot of emotions being expressed. My brief for the play was that despite it being a play of clowns, they didn’t have to look like mall clowns; they had to represent individual personalities in an effective and visually appealing way.

I worked closely with Meenal [production designer] to finalize on how the characters would be dressed and represent the changing time and mood of the acts. We divided the costumes into 3 colours to express the moods. These are grey and black tones in the beginning, followed by shades of greens and blues, and finally burgundy and maroons for the last act. We customized each costume in a way that the exaggeration was not clichéd. All the costumes are from the GaGa studio, created exclusively for the play. 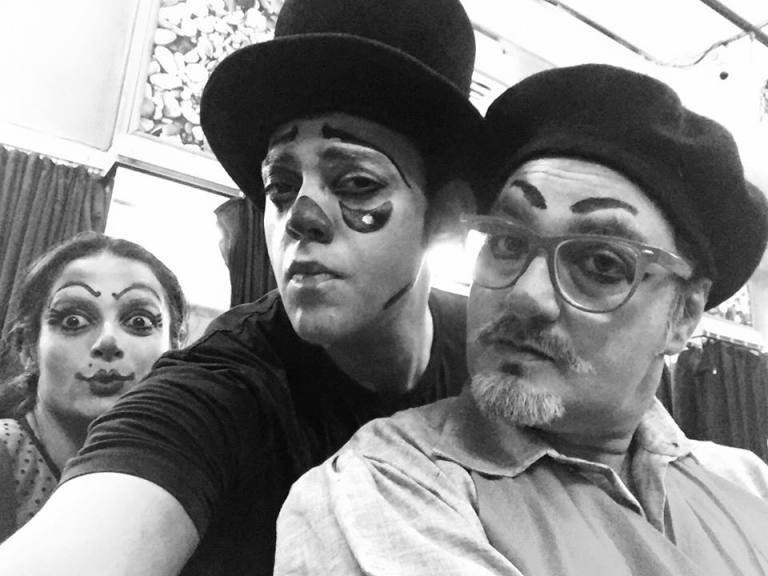 Each clown represents a specific personality. For the French clown, the detailing was different than the others so as to represent his heritage. For Vinay Pathak, who plays the lover Fido, we created vintage-inspired costumes. For Cyrus, who plays Jaques, we added a hippy touch. The actors individually explained their characters and evolution through the play, and based on this their costumes were decided.

We researched a lot on vintage clowns, and drew inspiration from the likes of Charlie Chaplin, his silhouettes, costumes and menswear fabrics. I also took inspiration from what Yohji Yamamoto does, especially with his colour palette of greys and blacks and his clown-chic style.

They are unique because we didn’t use conventional fabrics and patterns associated with clowns. Instead, we added our own twists. For instance, we used Polka but not in an over-the-top manner, we used new colour palettes, ikats and velvets. These fabrics are used in theatre, but not commonly for clown costumes. For Vinay’s character, we used corduroys, tweeds and an exaggerated silhouette. Faizah, who plays Rosalind, is petite, so we added bloomers and frilly skirts. So you see we played on exaggeration through body type, instead of comicality.

Working on this play was intimidating because each actor puts in a lot of time, effort and dedication. Rajat is an amazing director; he watches out for the minutest details and knows his art. It’s great to be a part of something so phenomenal.

‘I Don’t Like It As You Like It’ will be staged at NCPA on March 5th and 6th, and at St. Andrews Auditorium, Bandra on March 25th and 26th.

As told to Garima Verma | Edited by: Esther Cabral